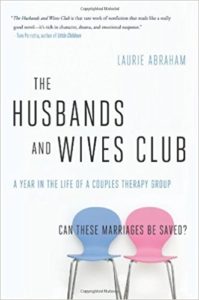 The Husbands and Wives Club

A Year in the Life of a Couples Therapy Group

A page-turning glimpse into five marriages and the fight to save them.

Psychotherapist Judith Coché is a veteran leader of couples groups, charged with saving five marriages. She has a provocateur’s bent, but if she goes too far, she may scare off the couples. “Causing the right amount of trouble is an art form,” Coché likes to say.

Marie & Clem: Marie is angry and bitter, Clem bewildered and complacent. His major complaint is the sexlessness of their 20-year marriage, but she couldn’t care less about that. Marie’s fervent desire? For yes-man Clem to talk straight to her.

Bella & Joe: When Bella married Joe a year before the group began, she worried that she’d “settled.” Instead of going for someone who was as ambitious and driven as she was, she picked funny, loving, devoted Joe. Now, with Joe an unemployed lawyer, Bella’s own entrepreneurial venture tanking, and a baby on the way, she thinks she made the wrong choice.

Sue Ellen & Mark: Sue Ellen and Mark married young, yet the romance between them is still palpable. In their late 40s, they ended up in couples therapy after Mark, a successful executive, grabbed his drug-addict son in a stranglehold.

Rachael & Michael: Rachael, 35, and Michael, 37, are newly married, both for the second time. They come off as good friends and lovers—except that he’s weirdly phobic about any display of negative emotion, to the point that she agreed never to cry in front of him. Unfortunately, Rachael has a lot to cry about.

Leigh & Aaron: Leigh and Aaron have been in the group for ten years, longer than anyone in Coché’s two decades of practice. Aaron has gone from complete impotence, caused by anxiety, to finally being able to have sex with his wife. The pair has vowed that this year will be their last, but is Aaron going backward?

"The Husbands and Wives Club is that rare work of nonfiction that reads like a really good novel—it’s rich in character, drama and emotional suspense."
—Tom Perrotta, author Little Children

"Abraham weaves increasingly fascinating sessions of a couples therapy group with meticulous research about love, marriage, therapy, and humanity. The result—part science, part psychology, part riveting drama—left me moved, cheering, and, frankly, floored by how far these couples could come."
—Cathi Hanauer, editor The Bitch in the House 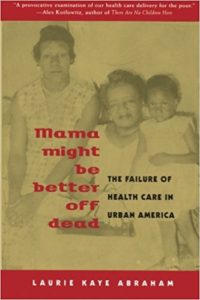 The Failure of Health Care in Urban America

This critically acclaimed book is an unsettling, profound look at the human face of health care. Both disturbing and illuminating, it is the story of four generations of a poor African-American family coping with the devastating illnesses that are all too common in America’s inner cities.

From visits to emergency rooms and dialysis units, to trials with home care, to struggles with Medicaid eligibility, Abraham chronicles the Banes family and their access (or lack thereof) to medical care. Embedded in the family narrative is a lucid analysis of the gaps, inconsistencies, and inequalities the poor face when they seek health care.

“A book of unexpected power. What begins as a matter-of-fact account of one black family’s struggle to get Medicaid care builds into an emotional indictment of our incomprehensible, illogical health care bureaucracy.”
— Walt Bogdanich, New York Newsday

“While the President and Congress—years late, outcome unsure—ponder the difficulties of providing health care for all, a Chicago writer goes to the heart of today’s problem in just a few words: ‘Health care is treated as a commodity available to those who can afford it, rather than a public good.’”
— Victor Cohn, The Washington Post

“Detail by detail, Abraham builds a convincing case for a massive overhaul of the nation’s health system. She is a graceful wordsmith and a gifted storyteller; Mama Might Be Better Off Dead often has the narrative force of a novel. If only the dire events of this book were fiction.”
— Miles Harvey, Utne Reader

“Best Books of 1993… If you doubt that this country needs universal health-care coverage, read this straight-forward report on how the present system fails one poor Chicago family.”
— Robert Wilson, USA Today

“Abraham has done prodigious research, and her grasp of the Banes family’s dizzying ride is formidable…. A powerful indictment of the big business of medicine.”
— Karen Stabiner, The Los Angeles Times 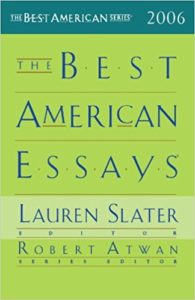 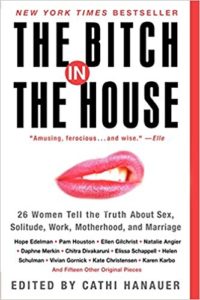 The Bitch in the House 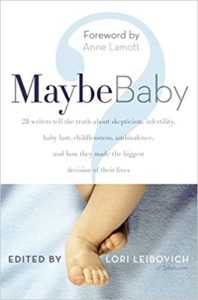 28 Writers Tell the Truth About Skepticism, Infertility, Baby Lust, Childlessness, Ambivalence, and How They Made the Biggest Decision of Their Lives
Edited by Lori Leibovich 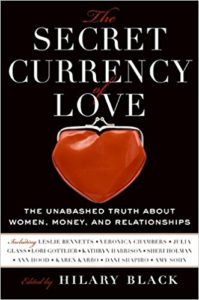 The Secret Currency of Love

The Unabashed Truth About
Women, Money, and Relationships